Skip to content Skip to main menu
Home › flea and tick control › Can Tick Bites Really Cause an Allergy to Meat? 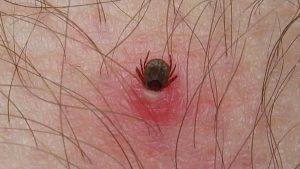 In the past few years there have been increasing reports of people developing allergies to meat after being bitten by a tick. This is formerly called an Alpha Gel allergy. Researchers in Virginia were among the first to discover it through clinical trials for a medication. Some patients were having a reaction to one component in the medication and would have similar allergic reactions to red meat or meat from mammals. Some people even have reactions to dairy products.

What Tick Causes the Allergic Reaction?

The Lone Star tick is the only tick that is currently known to spread the allergy to meat. The ticks are common in areas with high deer populations, since the Lone Star tick prefers to feed on the deer. You can identify a tick by looking at its back for a white dot in the center. If you find a tick attached to you, you will need to remove it right away, and then watch for symptoms.

How Can I Tell if I Have an Allergy to Meat?

The symptoms for the meat allergy will build over time. You will not have a sudden reaction just a day or two after the bite. The meat allergy is different from other food allergies, because it is often a delayed reaction, which means that you may begin to experience symptoms up to six hours after you have ingested meat.  There are a number of symptoms to watch out for including severe abdominal pain, runny nose, nausea, diarrhea and hives. Some cases can cause anaphylaxis.

Is There a Test for This Allergy?

Your doctor can complete a blood test to determine if you have an alpha gel allergy. The numbers may decrease over time, which means it may be safe for you to try to eat meat again. You will need to work with your allergist before you do this though as the reactions may get worse each time that you eat meat.

Is the Allergy Permanent?

Some people have had a decrease in the allergy after a few years have passed, while other people have had it expand to include other types of meat including chicken. It is best to avoid any meat from mammals completely in hopes that it may eventually go away.

Can Children Develop the Allergy?

Children have developed the allergy as well. If you have a child that was bitten by a Lone Star tick and begins to develop symptoms several hours after eating, it is a good idea to take him into to be tested. Be sure to ask for the test, especially if you live in an area that has a large number of Lone Star ticks, like Virginia.

Have a mosquito or pest question? We have the answer, Just ask!

Fill out the form below and we'll do our best to get you the answer!